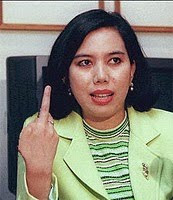 'I had sex with Ummi in London,' says witness

"I had sex with Ummi in London," said Norazman Abdullah @ Baginda anak Minda to the murmurs of those seated in the public gallery.

The 40-year-old Iban told judge Arifin Jaka that he had known Ummi since 1992 but their relationship only became close when they were in London in June 1998, together with businessman and former MP S'ng Chee Hua (who was Norazman's boss then) and another friend.

"When we returned to Malaysia, Ummi told me that she would give my ex-wife RM200,000 so that we (Ummi and I) could get married and elope to London," Norazman said, adding that he was then married with two children.

"Ummi also told me that I would have a 25 percent share in a RM10 million advertising project," he added.

Ummi, who made court appearances during Anwar's corruption trial last year in designer attire and matching accessories, had told the press that she "is still a virgin".

They later retracted their allegations and said they wrote the letters under coercion and on "mere suspicion".

"In the beginning, Ummi told me that the sodomy allegations against Anwar were true. But later, after our relationship became closer, she confessed that they were all fabricated," Norazman said.

He also told the court this morning that Ummi told him she "forced" Azizan to confess that he was sodomised by Anwar.

"Ummi told me that she did it because she hated Anwar and her brother Azmin Ali as they both did not give her any business projects.

"She also said that when Anwar was toppled from power, she will get an advertising project at Kuala Lumpur International Airport worth RM10 million from Tun Daim Zainuddin (business tycoon turned finance minister)," Norazman said.

He, however, added that he did not ask Ummi how she forced Azizan to make the confession.

Norazman, who is now a farmer, also told the court that while they were in London, Ummi had told him that Mahathir was the man behind the "50 Dalil: Mengapa Anwar Tidak Boleh Jadi Perdana Menteri" ("50 Reasons Why Anwar Cannot Become Prime Minister") book.

"She also told me that Daim, (former Malacca chief minister) Rahim Tamby Chik and (Umno executive secretary) Tengku Adnan Mansor were involved in the fabrication of the sodomy charges in the book," he said, in response to a question from defence counsel Gurbachan Singh.

According to Norazman, Ummi also told him that Khaled Jeffri was the writer of the book while (former finance minister) Tengku Razaleigh Hamzah, Daim and Tengku Adnan were the sponsors.

He added that Ummi called him one night in August 1998, and said that her father had disowned her because she had given false information for the contents of the book.

"Ummi called one night and said that she could not sleep and wanted to meet me as her father had chased her out of the house," he said.

Ummi's brother Azmin Ali, who was also Anwar's former private secretary and now state assemblyman for Hulu Klang, had testified earlier that Ummi is not the person she portrays herself to be and was disowned by her father in late 1998 "for running away with a married man overseas." ("[#1]Ummi eloped with a married man, says Azmin[/#]", April 7.)

Norazman also told the court that Ummi told him that she had written a letter to Mahathir but the contents (of the letter) were later amended by Aziz Shamsuddin, who was then the political secretary to the Prime Minister.

Meanwhile, the prosecution refused to cross-examine the witness, saying that his evidence was merely hearsay.

Lead prosecutor Abdul Gani Patail told the judge: "Unless and if Ummi is called to testify, this evidence is all useless."

The court will resume on Friday as Anwar's lawyers said that the rest of their witnesses, including Daim, deputy education minister Aziz, former consumer affairs minister Megat Junid Megat Ayob and his wife Ziela Jalil would only be called in if Mahathir was allowed to testify in the trial.

Arifin yesterday said that he would announce his decision on the application for Mahathir's testimony in court on Friday. The defence and prosecution had argued over the relevance of the prime minister's evidence for more than three weeks.

Anwar, currently serving a six-year jail term for corruption, is on trial for sodomy and sexual misconduct.

He and his adopted brother Sukma Dermawan are charged with sodomising Azizan at Sukma's apartment on "one night at 7.45pm, between January and March, 1993".

Anwar has repeatedly denied all charges and said they were fabricated by political rivals to end his political career.
Dicatat oleh FARIZ MUSA di 4:28 PG 0 ulasan 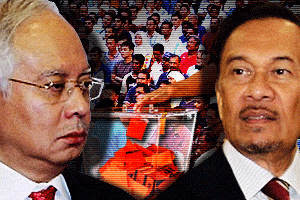 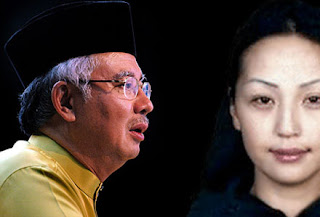