While the apex court heard Anwar Ibrahim's final appeal today after 11 years over his unlawful dismissal as deputy prime minister and finance minister, it was his counsel Karpal Singh who stole the thunder by asking judges at the hearing to be 'honest to themselves and the country'."It is preposterous that the prime minister can dismiss a minister and then inform the Agong...There must be judicial honesty in the courts in this country," the senior lawyer said."Your lordships need to ensure it is so.
The court has this right opportunity to correct what is wrong and do so with this case. There is a glaring mistake by the appellate court and this apex court ought to (intervene) on what was constitutionally wrong (done by the Prime Minister)," Karpal said in ending his submission.The second highest judge in the country Alauddin Mohd Sheriff, who is the Court of Appeal president was leading the panel of three judges hearing the matter.Alauddin on hearing this remark immediately asked Karpal, whether this was all and the senior lawyer said the court should not accept the argument by the government lawyers that the appeal was an abuse of the court process.
"It is an abuse of power (by the prime minister) and hence this appeal should be allowed," Karpal said.The other two judges hearing the appeal were Justice Mohd Ghazali Mohd Yusof and Justice Abdul Hamid Embong.Justice Mohd Ghazali was brought in today to replace Justice Hashim Yusoff who had decided to recuse himself as he had heard Anwar's sodomy appeal at the Court of Appeal in 2003.
Anwar's application was struck out by the High Court, without the matter being heard through a full trial. The Court of Appeal has also dismissed his appeal and ruled Anwar's dismissal as lawful.Two questions of lawKarpal at the start of his submission said there are two questions of law which are to considered:•Whether Article 43(5) of the federal constitution specifically requires the Agong to be the authority which revokes the appointment of the deputy prime minister and finance minister, or whether the cabinet has the right to revoke any appointment it makes; and•Whether the deletion of Anwar's name as deputy premier and the substitution of Mahathir's name as finance minister by virtue the Federal Government (Amendment) Order 1998, could in anyway cure the complete absence of the former premier complying with the explicit provision of the said Article 43(5).
Central to the issue of dismissal was the letter that the then-prime minister Dr Mahathir Mohamad had sent to Anwar on Sept 2, 1998 which stated:"With regret I am forced to dismiss you from the post of the deputy prime minister and finance minister and other related posts. The Agong has been informed over the dismissal."Karpal submitted the dismissal by the prime minister was in contravention of article 43(5) of the constitution, which provided the appointment of any minister may be revoked by the Agong on the advice of the prime minister.
"The appellant (Anwar) in substance contended his appointment could not be effected by the prime minister without prior assent of the Agong," he said.Appellate court misdirectedKarpal also submitted the appellate court judges had misdirected itself seriously when it concluded that while Mahathir's letter did not indicate there was a written command from the Agong, it was sufficient for the first respondent to state he had informed the monarch over the dismissal.Another judge, Karpal added , had also misdirected himself seriously when he stated under the constitution the Agong was a constitutional monarch and the power to dismiss the minister lies with the prime minister."The judgment also stated the prime minister at any time advise the Agong to dismiss a minister and the Agong was bound to such advise," he said."This is contrary to the grain, substance, spirit and clear wording of Article 43 (5)," he said.Clearly, Karpal said, it is the Agong who appoints a minister and it must follow that only the Agong being the appointing authority, could revoke the appointment.
The counsel questioned as to what transpired whether Mahathir had truly advised or merely told the Agong."Is it truly advice or did he merely inform the Agong? This raises questions on the abuse of power by the prime minister," he said.
"I am surprised the High Court and the appellate court chose to ignored this point," submitted Karpal.Kamaluddin: Agong did not object to dismissal Senior federal counsel Kamaluddin Md Said, representing the prime minister and the government, said Parliament records Hansard showed Mahathir informing the Parliament that the king did not object to the dismissal."This in itself is a clear compliance to Article 43(5) that the king had accented and therefore, the requirement under the said article had been met," he said.
Kamaluddin said the High Court and the appellate court were right when they decided that as a constitutional monarch, the king was required to act in accordance with the advice of the cabinet and the prime minister.
"By convention, the head of state must act on the advice by the government. This is similarly practised in Britain," he said."In the circumstances, we urge this court not to disturb the Court of Appeal's decision and dismiss Anwar's appeal."Anwar, who was present at the court today, said he was not expecting to get his posts back but to set the record straight on his sacking.
"It is the Agong who should have revoked my appointment and not the prime minister," he said.Anwar, who was with his wife and PKR president Wan Azizah Wan Ismail, also quipped to reporters, "Were you expecting a decision today?""It (would) never (happen) with a case involving Anwar," he smiled.After hearing submissions today, the Federal Court ruled that it will make a ruling at a later date.
Dicatat oleh FARIZ MUSA di 5:27 PG 0 ulasan 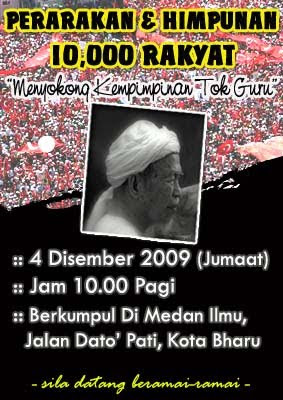