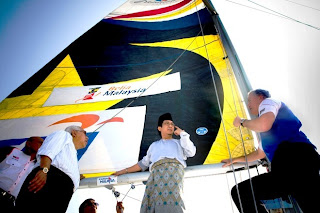 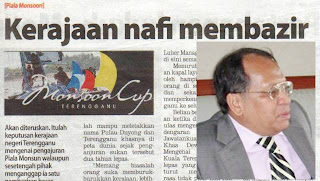 When oil and gas dried up in our land... Have you ever imagined?

Due to Malaysia’s heavy dependence on oil and gas, the economists predict that our nation will received a high impact on economy when earth stop provides the natural resources. According to the World Bank, our country is too reliant on the oil and gas to generate our economy.

This is meaning that we have no back ups to recover our economy during the time we lost the biggest income of the nation. Our leaders never had thought that one day the oil will dry up and they need to do something to save our economy. By broaden our economy rather than depending on the natural resources, we can minimise our risk to flop as a ‘bankrupt nation’.

The wasting of money to develop F1 cars, new palaces, submarines, helicopters and so on will further risk Malaysia in near future. Our government should wisely spend Petronas income by focusing on the economy and to facilitate the people by providing better schools, roads, bridges, hospitals, temples, mosques, and other positive developments.

The report by World Bank also stated that about 40% of the country’s revenue is from oil and gas. Hope our leaders craft new plan to face upcoming possibilities, perform an immediate revision on World Bank’s report. Our leaders must take full responsibility on this matter and do something before it’s too late. 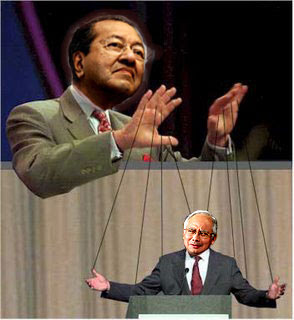 'That is your legacy You silenced the voices of dissent in no uncertain terms. And in the end, the monsters your created devoured you in the process.'

Suhaimi Said: Dr Mahathir Mohamad, I remember you as a dictator. Hundreds of people were detained under ISA during your rule. So don't talk about democracy. I was a victim of your dictatorship.

Equaliser: Dr Mahathir, you killed democracy in Malaysia - that is your legacy. We don't need people like you anymore in this blessed country. You are a Malay nationalist, that's all. You didn't serve all of Malaysia's people, which include the Chinese, Indians, and other ethnic groups.
A statesman is one who has served his country's people well and promoted democratic values and principles within government institutions and society as whole. You silenced voices of dissent in no uncertain terms. And in the end, the monsters your created devoured you in the process.

Yes, you created monsters greedy for money and power, and who were willing to use any means necessary to acquire them. This country has failed to serve all its people and continues to do so. You began the trend of money politics and this is the result of your actions.

Just watch the news daily and you can see how lop-sided the coverage is in favour of the ruling party, and this right in front of our very own eyes. If only all Malaysians would open their eyes and ears to see and listen, they would know what to do come the 13th general election.

Kris: It has been estimated that during Mahathir's premiership, the amount of taxpayers' money allegedly misused by him and his cronies was in the region of hundreds of billions. To carry out this, he completely destroyed the judiciary and the enforcement agencies by replacing the honest top officials in these agencies with tainted officials who could be blackmailed into doing his bidding.

By having these people under his thumb and by controlling the media and the civil service, he ensured that he literally had dictatorial powers. To make sure that all the crooked deals that he made were not known to the public, he enacted laws like the Official Secrets Act.

In short, he was a premier who manipulated the democratic system to give himself dictatorial powers. That is why it is extremely disgusting to hear this man pontificating on democracy or corruption.

Playfair: It is sad but not surprising that Dr Mahathir continues to peddle half-truths to justify his opinions. He reduces democracy to a one-dimensional event - elections - and fails to refer to other equally important elements that constitute the package called democracy.

He speaks of "sore losers", but what about the 'tyranny of the majority' (which he should be all too familiar with)? A system cultivated and nourished through dubious means and made legal through a two-thirds majority and then used to subvert national institutions to do the bidding of the majority - sore losers are nothing compared to this tyranny.

Asian values were promoted as an ideology to restrict mass political participation, good governance, transparency and accountability. The sacking of Anwar Ibrahim could not have been more un-Asian, not to mention un-Islamic, un-Malay and un-Malaysian (if Umno will allow the use of such a term).

Please keep speaking, sir, so that we can find out how you worked your way to remain in power for so long.

TC88: Talk about sore losers. Mahathir is probably a hypocrite. When Umno was declared illegal and Mahathir's position as its leader and prime minister was sorely threatened, he sacked the then Lord President and the five Supreme Court (now called the Federal Court) judges when he knew the verdict was not going to be in his favour.

Dr Mahathir, you destroyed the very fabric of Malaysia's public institutions, its constitution, the judiciary, the enforcement agencies like the police, attorney-general, and the then ACA

This has been highlighted by Ku Li (Tengku Razaleigh Hamzah) in his speeches. Please do the honourable thing and retire, and just keep quiet like your anointed successor, Pak Lah (Abdullah Ahmad Badawi), the Father of Malaysia's Conscience.
Dicatat oleh FARIZ MUSA di 12:55 PTG 0 ulasan 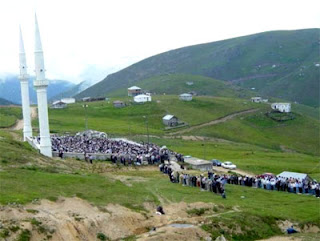 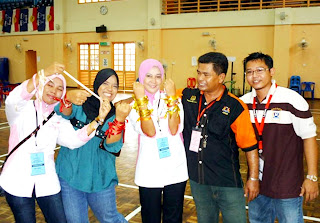 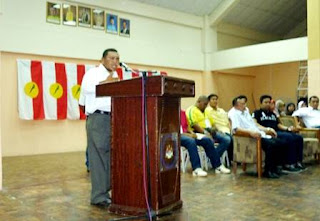 >>> Ikuti Seterusnya Cherchez The French, Who got what for the sale of French submarines to Malaysia? 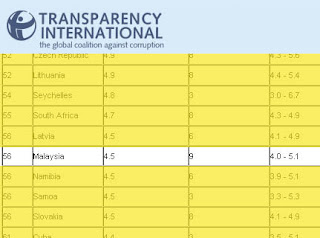 Malaysia is No.56 in Transparency International’s Corruption Perception Index (CPI)
Malaysia suffered a major blow in terms of combating corruption today when it fell to its worst ranking and score in 15 years in Transparency International’s corruption perception index for 2009. In the ranking which was revealed today Malaysia plunged nine places from last year’s 47th CPI ranking to 56th position.

DAP parliamentary leader Lim Kit Siang, in an immediate reaction, said while he had expected a poor result, he did not anticipate such a grave fall. “This is a national shame and major blow for Najib’s premiership,” he said.

“I have no doubt that the mysterious death of DAP political aide Teoh Beng Hock on July 16 and the Malaysian Anti-Corruption Commission’s role as UMNO’s catspaw to declare war on Pakatan Rakyat instead of declaring war on corruption were major factors for Malaysia’s worst-ever TI CPI ranking and score,” he said.

He questioned if Prime Minister Najib Abdul Razak will react to the embarrassing fall suffered by Malaysia.

The Berlin-based Transparency International is the global civil society organisation leading the fight against corruption.

Meanwhile Transparency International Malaysia (TI-M) has acknowledged Malaysia’s efforts to deal with corruption although the country’s ranking on the corruption perception index (CPI) this year has declined.TI-M president Paul Low said Najib’s moves to initiate reforms in some institutions, especially the judiciary, and the setting up of the Malaysian Anti-Corruption Commission, to make them more independent, transparent and accountable, was the way forward for the country.

He said this at a press conference to announce Malaysia’s position in the Transparency International Corruption Perceptions Index 2009.

Low also said Transparency International Malaysia believed that the way forward for the country was to seriously combat corruption and to make government decisions and transactions more visible and transparent. He, however, suggested that the government should be more transparent in its procurement process by implementing “integrity agreement” with vendors to act as preventive measures to curb corruption.

He also said that Malaysia’s decline in ranking in CPI 2009 of 0.6, from 5.1 in 2008 to 4.5 this year, “may be attributed to the perception of little progress in combating corruption, and lack of political will in implementing effective anti-corruption measures”.

Examples giving rise to the concern were the Port Klang Free Zone (PKFZ) fiasco and the auditor-general’s annual report highlighting extraordinary public procurement abuses, he said. “However, there are positive signs. The PKFZ fiasco is being actively and vigorously investigated, police reports have been made and suits have been taken against certain parties, and corrective measures have been taken.

Singapore on the top tier

In announcing its latest CPI in Berlin today, TI said that no region of the world was immune to the perils of corruption.
“At a time when massive stimulus packages, fast-track disbursements of public funds and attempts to secure peace are being implemented around the world, it is essential to identify where corruption blocks good governance and accountability, in order to break its corrosive cycle” said Transparency International chairperson Huguette Labelle in a statement.

He added that most of the 180 countries included in the 2009 index scored below five on a scale from 0 (perceived to be highly corrupt) to 10 (perceived to have low levels of corruption) – Malaysia scored 4.5. He also said that the CPI measured the perceived levels of public sector corruption in a given country and was a composite index, drawing on 13 different expert and business surveys.

Highest scorers in the 2009 CPI were New Zealand at 9.4, Denmark at 9.3, Singapore and Sweden tied at 9.2 and Switzerland at 9.0. “These scores reflect political stability, long-established conflict of interest regulations and solid, functioning public institutions,” said Labelle.

He added that overall results in the 2009 index were of great concern because corruption continued to lurk where opacity ruled, where institutions still needed strengthening and where governments had not implemented anti-corruption legal framework.
Dicatat oleh FARIZ MUSA di 12:53 PG 0 ulasan